June 8th – 14th – Criterium du Dauphine Libere 2010
This major French Pro Tour bike race has become one of the two important lead up events prior to the Tour de France and it’s one of the favorites of Practice Bicycle tours. It brings the final opportunity along with the following weeks Tour de Suisse for the top professional bike riders to test their form ready for July.
This 8 stage International bike race takes place each year in early June with the race route using the magnificent roads of the Rhone-Alps Region of France. The 2010 bike race has now been finalised and the highlight for our guests in 2010 will be to ride and view the spectacular stage finish on Alpe d’Huez (1850m), one of the most well known mountains of cycling due to the fact that the Tour de France has finished here 26 times! With it’s 13.8km, average gradient of 7.9% and 21 hairpin corners it will be a very special day as you experience the magnificent scenery of the French Alps on your bike race tour with a difference from the team at Practice Bicycle.
A spectacular bike tour around this prestigious event, a combination of catching up with the excitement and action of the bike race live on 2 or 3 stages with the contrast of your very own unique tailored rides in this idyllic area of France. This fantastic week of fully-guided bike riding is available to you in June in the Rhone-Alps region of France, a particularly enjoyable time of year to be in Annecy and the French Alps.
The June period is also the perfect time for a cycling holiday in France for those who prefer slightly less people than the peak summer month of July. Not only will you have the famous roads used by the Criterium du Dauphine Libere and the Tour de France available for your bike rides each day, but also the gentle roads around Lake Annecy and the incredibly green landscape of the Bauges valley.
These same roads are used with our Luxury bike trips, Annecy Bike Trip between April – September. All of this plus the opportunity to relax amongst the cafes, restaurants and shops and enjoy everything that Annecy and the Haute-Savoie region of France has to offer.
For our guests in 2010 new accommodation options are available, offering you greater convenience and choice whilst in the beautiful town of Annecy, the perfect environment to base yourself for a superb quality cycling holiday week giving you the ideal opportunity to get up close and personal from the road side and view all the excitement of July without the large numbers of spectators that we expect from the “Tour de France”
The perfect balance of riding and relaxing with Practice Bicycle – Criterium du Dauphine Libere cycling escapism! 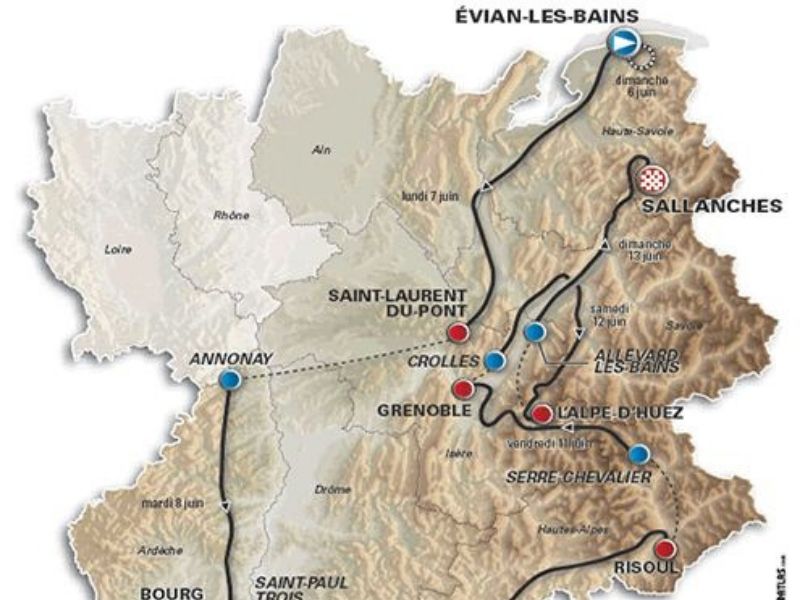 The “Criterium du Dauphine Libere” Race
Last years Criterium du Dauphine Libere was won by the Spanish rider Alejandro Valverde with Australia’s Cadel Evans only 16 seconds behind, third spot on the podium was Alberto Contador (Tour de France winner).
This year promises to be another spectacle, it will be the 62nd edition and with a new director of the bike race a superb route is expected. This prestigious bike race can proudly say that all the racing cyclists who have won the Tour de France 5 times (Anquetil, Merckx, Hinault, Indurain and Armstrong) have won the “Criterium du Dauphine Libere”, this makes it a very special bike race in June. This race has been won by many of the greats of cycling, including the English speaking riders Brian Robinson, Greg Lemond, Phil Anderson, Robert Millar, Tyler Hamilton, Lance Armstrong and Levi Leipheimer.
If you like the History of cycling, you may be interested to know that the race was first run in 1947 with the winner coming from Poland, Edouard Kalbinski. After the second world war, where cycling had stopped for 5 or 6 years, the newspaper Dauphine Libere decided to create and organise a bike race through the region of France called the “dauphine” the event was to proceed before the Tour de France, which remains true today.

The “Criterium du Dauphine Libere” Region
The “dauphine” was a former Provence of South-East France with its historical capital in the city of Grenoble, today this represents the southern part of the Region of France called the Rhone-Alps. Today the Rhone-Alps is serviced by the famous regional Newspaper “Le Dauphine Libere”, offering its readers 24 editions covering 8 different Departments of France, with its business head office based in Grenoble and so each year the race has a stage finish in this city.
The name of this Region, the Rhone-Alps is based on its two major geographical features, the River Rhone and the mountain range of the Alps. The Rhone River provides an important passageway between the North and South of France; the Romans recognised the strategic importance of this route when they founded Lyon over 2,000 years ago. The city of Lyon is now the capital of this large and important region of France.
The Rhone valley also provides the important wine producing regions of the Cote du Rhone and the world famous Beaujolais. The other major geographical features of the region are the Alps, they are one of the great mountain range systems of Europe, the highest mountain in the Alps is the famous Mont Blanc (White Mountain) at 4808m. This magnificent mountain range with its snow capped peaks has some of the most popular all year round resorts in the world, including the unique and charming town of Annecy. The Criterium du Dauphine Libere often visits other famous Alps of the region, Col de la Croix de Fer, La Toussuire, Col de Joux-Plane and Col du Cucheron.