The Aussie and American cyclists in Annecy are everywhere in the Haute Savoie department of France. During the amazing Tour de France 2014 cycling vacation week, we included several great opportunities to explore Cycling Paradise from the No1 cycling destination of Annecy.
On one of these spectacular cycling days we stopped at a favourite lunch spot, one of our Hidden Gems for a relaxing break in the medieval village of Alby-sur-Cheran. 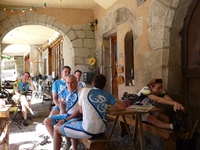 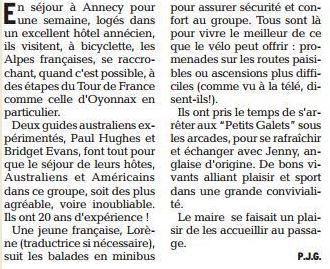 Arcadia Restaurant in Alby-sur-Chéran
Eat under the arcades between Annecy and Aix-les-Bains traditional homemade cuisine based on fresh market produce located in the heart of the medieval town of Alby-sur-Chéran, the restaurant L’Arcadie welcomes you.

Cyclists in Annecy explore this amazing region with Alby-sur-Cheran the gateway to the Parc des Bauges National Park, with its network of breathtaking French cycling roads often explored with a Practice Bicycle cycling experience.

The origins of Alby
The origins of Alby-sur-Chéran date back to the Middle Ages. At that time, the city was divided into two distinct parishes: Saint Donat and Saint Maurice. They were united in 1788 to form Alby. The town took the name of Alby-sur-Chéran only in 1860, during the integration of Savoy into France, this certainly in order to avoid any confusion with the town of Albi in the Tarn.

Alby was born from a river, the Chéran, for both strategic and economic reasons. The ford over the Chéran was in fact a necessary means of communication between the towns of Annecy and Chambéry. This strategic place was therefore defended by no less than seven castles. Of this defensive system, all that remains today is the Château de Montpon (private residence), rebuilt at the end of the 15th century, and a few remains, including the choir of the Saint-Maurice chapel.

Shoemaking
The influx of travelers also allowed crafts to develop.
Shoemaking, in particular, which until the beginning of the 20th century was Alby ‘s main activity. In 1880 there were about 300 shoemakers out of a population of 1200 inhabitants. Their reputation was great because they go to all the markets and all the fairs in Savoie and Ain.
The postmen of the Alps have also been fitted with Albygeois shoes for several centuries. Their activity had the effect of developing the narrow street and the Place du Trophée, where they worked leather.

Bridges
The construction in the 17th century of the Pont Vieux with three arches marks the beginning of the prosperity of the town. This will be replaced around 1720 by a structure with a single arch.

Development
Under the impetus of Pierre Paillet, elected general councilor in 1973 and mayor of Alby-sur-Chéran from 1983 until his death in 1991, the town is changing. It seizes the opportunity offered by the motorway interchange to create jobs and attract a new population.

In 1985, the four paths industrial zone (renamed Espace Leaders) was an innovative initiative: it was the first zone of this type to be intermunicipal. It keeps the rural character of the rest of the township and concentrates industries near the access to the highway. Enlarged in 1990-1992, it now generates a thousand jobs.

It was also during this period that social housing was built. The commune is also equipped with a new college and a new school, a post-collection and a new gendarmerie. Since 2017, the town has been attached to the Greater Annecy conurbation.

Alby-sur-Chéran, which had only 750 inhabitants in the 1960s, has seen its population grow and above all rejuvenate to reach the threshold of 2,700 inhabitants today. Over the course of its development, Alby-sur-Chéran has taken on a urban character but is committed to preserving its heritage and its soul.