In 2015 we shared the opening stages of the Giro action in Sanremo and the blue Mediterranean coast line as our backdrop for a fantastic week of true Italian cycling.  In 2016 join the team with all the race background (Owner/Operator Bridget Evans participated in Giro d’Italia Donna 1999 & 2001) and passion for life both on and off the bike in the town of Fossano, Piedmont for your own Giro d’Italia experience!

The Region of Piedmont literally translated means ‘at the foot of the hill’ and with the Italian/French Alps to the west and the Langhe UNESCO World Heritage wine and cheese area to the east, enjoy a selection of superb tailored rides to suit all abilities come and experience a bike tour with a difference at the Giro d’Italia in May 2016! 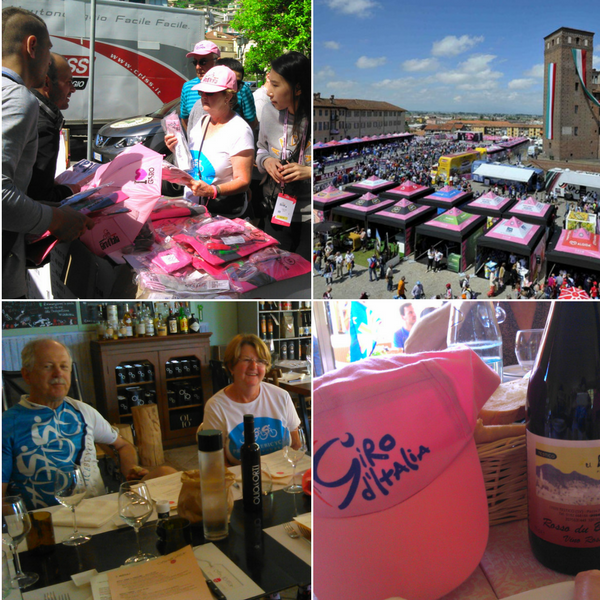 THE PIEDMONT REGION
The town of Fossano in the Province of Cuneo and in the region of Piedmont is perfectly situated to explore this wonderful part of Italy. Close proximity to both the majestic Italian/French Alps and the UNESCO World Heritage Langhe area famous for its wine and cheese production. If you love great wine we’ll take the opportunity to explore some of their best such as Barolo, Barbaresco, Dolcetto d ’Alba and Arneis.
The most obvious structure of the town is the massive Castle of the Princes of Acaia with four high towers built in 1332 with a beautiful inner courtyard. The castle, after serving as a jail and barracks, is now used for cultural events and also one of the biggest libraries of the region. (Giro d’Italia 2014 used the castle for a spectacular stage start)
The old part of the town of Fossano lies in the high part of the town. It is divided into two ancient quarters: Borgo Piazza developed in the 15 -18centuries, and Borgo Vecchio (Old Quarter), the oldest part of the town, dating from the Middle Ages. Rich in mediaeval, Renaissance and Baroque buildings, it is characterized by the ancient arcades, built on both sides of via Roma (the main street of the old town). On the Eastern side, the old town is a pedestrian promenade with a wonderful sight of Langhe area and on the Western side; you can enjoy the panorama of the South-western Alps, with the pinnacle – Monviso.

The Piedmont region name comes from the Medieval Latin meaning ‘at the foot of the mountains’, surrounded on three sides by the Alps and with borders to both France and Switzerland. It interestingly is the second largest of Italy’s 20 Regions after Sicily! The countryside is very diverse with the rugged peaks of the massifs of Monte Rosa and Gran Paradiso, the gentle hillsides of the Langhe area to the plains and damp rice paddies of Vercelli and Novara.