Monday 12th October – Arrival Day in San Marino (RSM)
Arrival: Midday
Planned Ride Option:
Distance 30km/19mi Ascent 300m/990ft route Montescudo
Inclusions: Bologna Airport Transfer (Italy), Welcome Drinks & Dinner
Non Cycling Guests: Share the spectacular tour day sights
Arrival Day in Italy and the Republic of San Marino, one of the smallest and oldest independent states in Europe along with the Vatican City and Monaco. San Marino is wonderfully situated on the slopes of Mount Titano a great location for your Giro cycling holiday, the Giro is an amazing event and far more than only climbing mountains every day in the temperamental weather of the Dolomites.
Welcome to your unique Giro d’Italia 2020 with Practice Bicycle Tours and the start of your action-packed dream bike tour escape overlooking the Apennine Mountains and the Adriatic Coast of Italy! Once transferred to your Hotel, relax and unwind should time permit we can enjoy a welcome ride together in this very special part of Italy.

This evening relax and enjoy an Aperitivo as we officially welcome you to the Giro d’Italia, followed by classic Italian dinner, finished in true Italian style with a gelato and grappa! 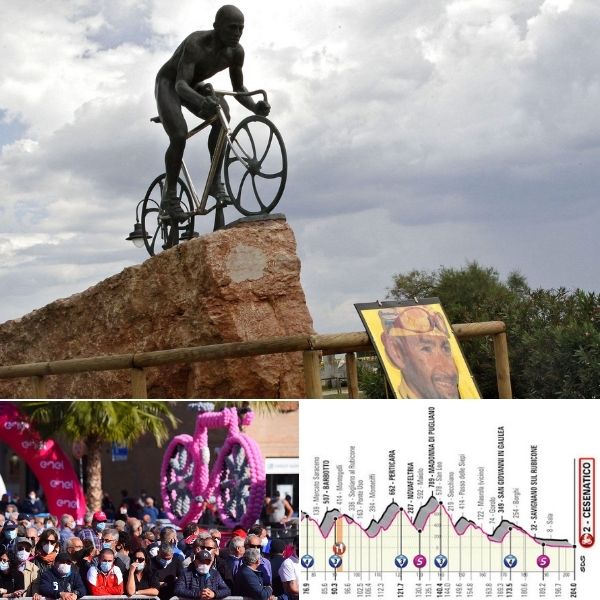 Tuesday 13th October – View Giro d’Italia Stage 10 – SAN SALVO > TORTORETO LIDO (Colle)
Planned Ride Option:
Distance 75km/46mi Ascent 650m/2100ft route Porto Sant’Elpidio
Distance 55km/34mi Ascent 650m/2100ft route Martinsicuro
Distance 35km/22mi Ascent 600m/1900ft route Tortoreto GPM
Inclusions: Breakfast, Giro Restaurant Lunch
Non Cycling Guests: Share the spectacular tour day sights & Giro d’Italia stage
Today is your first day at the 2020 Giro d’Italia with live viewing of stage 10 on the testing undulating roads of Tortoreto before the short descent to the finish line on the Adriatic coast. With the peloton winding towards us on this long 212km stage anything can happen at the Giro and it often does. Add in a technical final 50km circuit including 3 climbs of Tortoreto Alto and the atmosphere will be electric.
We will transfer by vehicle this morning along the coast before your choice of ride options begin to your ‘Unique Live Viewing Spot’, amazingly you will get to see the race three times and all the final attacking action in Tortoreto Alto.
Tortoreto is in the Abruzzo region of Italy and made up of two distinct parts. The ancient medieval village of Tortoreto Alto on a hill and not far from the Adriatic Sea, whilst the new Tortoreto Lido is a coastal resort town where todays Giro stage finishes.
The uniqueness of your Practice Bicycle bike tour comes from a skill set developed with over 20 years of spectacular cycling and bike racing. Choose your perfect bike ride as we join the race action live from the roadside amongst this wonderful region, the first of our thrilling opportunities to see the best professional cyclists in the world at this years Giro d’Italia with the tifosi fans of cycling!

Wednesday 14th October – View Giro d’Italia Stage 11 PORTO SANT’ELPIDIO > RIMINI (Stage Finish)
Planned Ride Option:
Distance 80km/50mi Ascent 1100m/3600ft route Santarcangelo di Romagna
Distance 55km/34mi Ascent 380m/1200ft route Coriano
Distance 40km/25mi Ascent 150m/500ft route Rimini
Inclusions: Breakfast, Giro Adriatic Restaurant Lunch
Non Cycling Guests: Share the spectacular tour day at the Giro d’Italia finish line
After yesterdays attacking finale in the hills today stage 11 will be an opportunity for the super-fast sprinters to win a prestigious Giro d’Italia stage. This 181km stage is one of the flatter stages of this year’s Giro with the final 40km over undulating terrain before an expected sprint on the esplanade of the coastal town of Rimini.
Enjoy riding from your Hotel this morning with our Giro tours and also returning by bike if you wish, as we discover for ourselves how undulating the race route is as we ride the final 40km of the stage today. Relax in true Italian style over a leisurely lunch before the show arrives in town at maximum speed.
For movie fans the race organisation chose Rimini for this stage finish to commemorate the great movie director Federico Fellini on the centenary of his birth. he is recognized as one of the greatest and most influential filmmakers of all time with quotes, Life is a combination of magic and pasta. And Experience is what you get while looking for something else
What could be a more perfect day for all fans of world cycling with your ‘Unique Live Viewing Spot’ on the streets of Rimini and all the excitement of the final push to the line and the eventual winner of the Maglia Rosa.

Tonight feel more Italian than you thought possible with a traditional evening promenade and dinner of an Italian feast at your leisure. 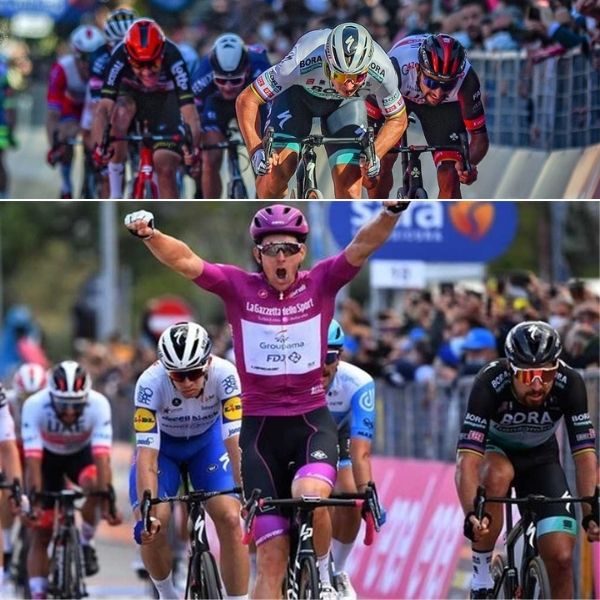 Thursday 15th October – View Giro d’Italia Stage 12 CESENATICO > CESENATICO (Colle)
Planned Ride Option:
Distance 97km/60mi Ascent 1290m/4200ft route Perticara GPM (662m)
Distance 77km/48mi Ascent 1080m/3500ft route Maddona di Pugliano GPM (789m)
Distance 52km/32mi Ascent 580m/1900ft route Secchiano
Inclusions: Breakfast, Giro Village Restaurant Lunch
Non Cycling Guests: Share the spectacular tour day sights
The Giro d’Italia peloton may not be in the high mountains of Italy, although todays stage 12 with 3840m of climbing will challenge the best and could be a key stage in this years event. The stage route is following the same roads as the famous Italian amateur event the Grand Fondo Nove Colli (Nine Hills) celebrating its 50th year.
The pro riders have 5 category climbs to battle over and we will be in the middle of the action at your ‘Unique Live Viewing Spot’, the perfect spot to relax on this years Giro tours with lunch and the best flavours of Italy and all the excitement of the race for pink.
Riding from your hotel this morning is just the perfect cycling holiday ‘Unpack Once, Cycle Everyday’ is the proven Practice Bicycle formula, as we explore the roads together of the Emilia-Romagna and Marche regions with great cycling. Tailored guided riding is our specialty as we share with you these classic Italian cycling roads at the foot of the Apennine Mountains and the Giro d’Italia 2020.

This evening explore the town of San Marino with its historic labyrinth of streets and buildings. Take the time to sit and take in the priceless views and for those wishing to stretch the legs visit the Three Towers of San Marino located on the three peaks of Monte Titano.

Friday 16th October – View Giro d’Italia Stage 13 CERVIA > MONSELICE (Stage Start)
Planned Ride Option:
Distance 95km Ascent 700m route Cervia
Distance 45km Ascent 100m route Cesenatico
Inclusions: Breakfast, Giro Restaurant Lunch
Non Cycling Guests: Share the spectacular tour day sights & Giro d’Italia stage start
Experience for yourself why we all love Italian cycling and the Giro d’Italia with a visit to the Stage 13 start with all the flash and glitz of a fashion parade at one of the biggest bike races in the world! Whilst you wander amongst the stage start in Cervia, look out for your favourite teams and cycling stars in a tranquil mood after yesterday’s heavy day of climbing. It’s also a great opportunity for you to get that special memento picture of the Pink of the Giro!
Riding from your hotel, enjoy as much time in the saddle as you wish today with your ride along the Adriatic coast to the stage start. For historians of cycling we will stop for a Café break on our ride at the Marco Pantani Memorial in Cesenatico. Marco Pantani won both the 1998 Giro and 1998 Tour de France, this prolific climber was a star of cycling and encouraged a generation to take up our great sport.
This coastal area is one of the most popular destinations for the summer beach holidays in Italy, where row after row relax in true Italian style. Relax together one more time with our final Giro lunch and a local favourite dish of tagliatelle al ragu, smothered in its chunky meat sauce it could be your favourite too!
Like fine wine, the team at Practice Bicycle offer refined Giro tours, only possible with all the knowledge of their own life of International racing an experience which today they enjoy sharing with you. This evening celebrate your Giro cycling holiday together with a local glass of Sangiovese di Romagna.

Saturday 17th October – Departure Day from San Marino (RSM)
Departure: Midday
Inclusions: Breakfast, Transfer Bologna Airport (Italy)
Departure Day and It’s unfortunately time for your Giro d’Italia to draw to an end and so must the dream as we transfer you to Bologna Airport this morning and your onward travels.

‘Arrivederci’ from Practice Bicycle Bike Tours until the next time.