With the cycling season full gas in Tirreno and the one day Classica Milano-Sanremo just around the corner which highlights the spectacular Italian Riviera.
Super fast roads, the panache and razzmatazz of the Giro d’Italia and spectacular Sanremo are waiting for you this May.  Join us for Liguria Giro d’Italia by bike for an unique Italy that you will never forget! 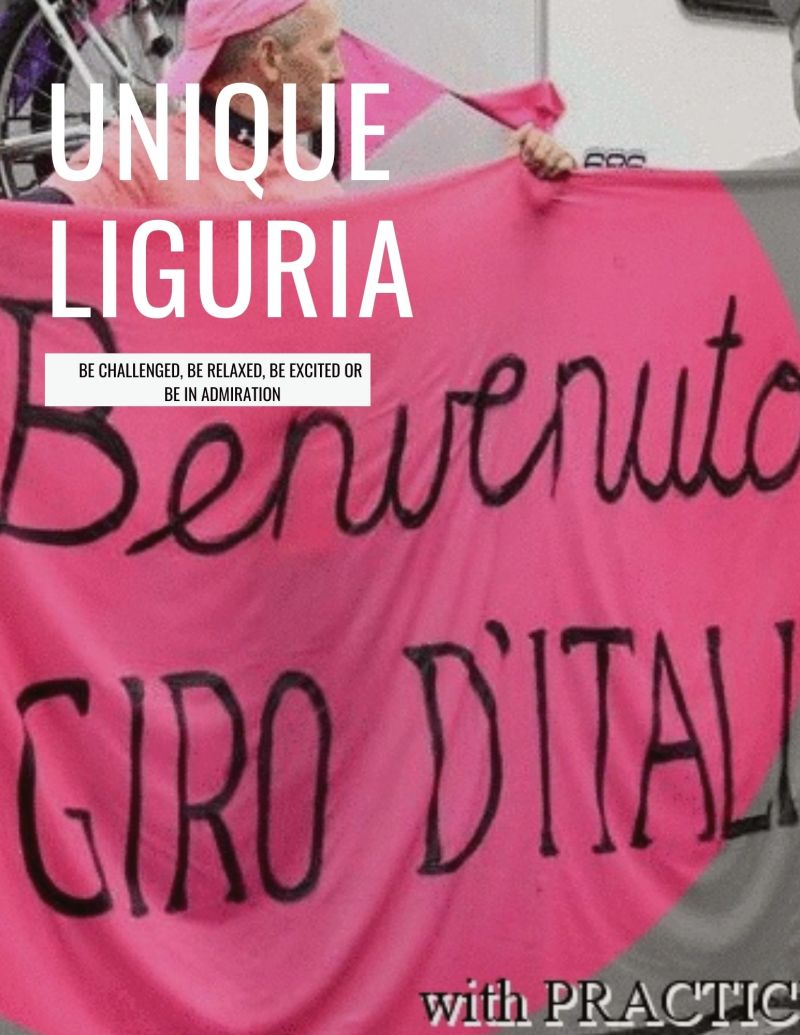 Back Track a few years and read the exploits of Bridget’s Cycling Diary.

Guess what? I’ve just got a start in the GIRO D’ ITALIA! So we have to catch a train on Friday afternoon 3pm to ASTI which is a town just outside of Torino.
We stay the night, meet the team whose name is CHIRIO MONTICHIARI D’ ASTI (ice-cream company). Then the following day we drive 1000km+ South to Sicily, the Island off the bottom of Italy and racing starts on Sunday for 2 weeks (SHIT!).
I’m so excited; it’s my opportunity to show at a major tour again, it looks like mostly undulating to flat for the first 10 days, followed by 3 big mountain stages and a 34km TT on the final stage.  Although Paul is very suspicious of the stage details, as they often show a slight bump in the ‘race bible’ and it ends up being a major Mountain!
The rest of the team consists mainly of 4 Italians, 1 Japanese, 1 Ukraine, 1 Venezuelan, and me! the Aussie!

To top if off today my parcel arrived from USA with my new bib-Knicks just in time! It arrived via FED EX, but the French customs want an additional charge of 600Fr or US $75 what a joke! So after several phone calls, no pay, no parcel! We then phoned USA and the staff at Voler offered to pay the additional charges for us (wow!) he also thought it was of major importance to them that I was riding the Tour of Italy in their brand of gear so tomorrow we will try to retrieve the parcel and pay the additional costs and Voler kindly offered to give me some additional gear FREE in lieu of all the hassle!
God there are some great people around the world, but not the French Customs! It seems like customs got hold of it unbeknown to USA, whacked some duties on it bunch of shits!
The Giro organisation and Italian composite team are happy to include Paul with the team so he will be with me to assist, as it is mixed it will be typical chaos no doubt.
It’s like going on holiday for 2 weeks superb hotels and great Italian food to look forward too! Do I reckon I can loose a kg or two in the next two weeks…Paul thinks possible 130km every day for 14days = 1820km!!!
I’ll ride real fast and hope for some good results and think of my Mum & Dad and everyone who has given up everything to help me, for which I am so grateful, I want you to know I’ll do my darndest to achieve, you all know how unhappy I am when I’m not having success!

Note: Paul has been professionally coaching for over 15 years and holds an Australian Cycling Level 2 Coaching Accreditation. His experience and knowledge of all things cycling is available during your Bike Tour Escapism and privately upon request.